A staggering 1-in-3 women, 1-in-6 men and 1-in-5 children are victims of domestic abuse in England and Wales. Costing the economy 66 billion pounds a year, with a call made every 30 seconds to police about abuse. 2 Women a week loose their lives in England and Wales. We need to create awareness of this epidemic and bring change.

A better understanding of the signs and effects of abuse is vital for all to enable prevention, so to mark Domestic Abuse awareness month in England we held a Convention. 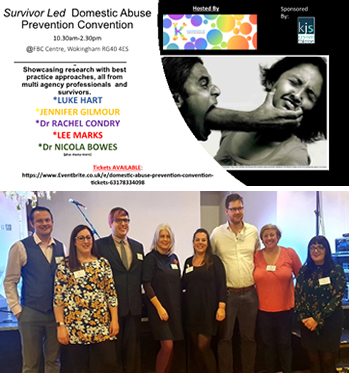 Our event covered different aspects of domestic abuse explaining the impact, signs and symptoms, the effects on children and the family, plus the realities of service involvement, all delivered through the eyes of survivors and multi-agency professionals. It aimed to break the cycle through preventative measures with first-hand knowledge of the system and research. We had the only English EU study findings presented along with amazing speakers and more ground breaking research.

The convention was opened by Burridge, an up-and-coming singer/song-writer based in Lomdom.   with her song Panic about living with a narcissist.

Our keynote speaker was Luke Hart.  Luke is a survivor and co-author of the book ‘Remembered Forever’ which covers his experience of growing up with coercive control and emotional abuse, and the murder of his sister and mother at the hands of his father in July, 2016.

Luke spoke about his work since the murder of his mum and sister by his father and openly shared his story highlighting domestic abuse in its many forms. Luke’s story was greatly received and struck a cord with many attendees who recognised some of the patterns of abuse he explained.

Dr. Rachel Condry, Associate Professor and Lecturer of Criminology at the University of Oxford. Rachel Showcased the findings from the first large-scale UK study of adolescent to parent violence including possible causes and effects. She is the author of ‘Families Shamed’ examining the experiences of relatives of those accused of serious crimes.

Dr. Nicola Bowes – Senior Lecturer and Lead BPS in Forensic Psychology at Cardiff Met University, showcased her European ‘Lights4Violence’ Project .  This is the only study in the UK to be carried out. Nicola explained methods that can be used to help promote adolescents’ capabilities and intimate relationships with peers to reduce dating violence as early as possible. Nicola believes that Kaleidoscopic UK’s intentions to educate from as young as three years old is imperative as her study shows from age 11  IPV is already an issue for many young people.

Jennifer Gilmore, an author and advocate for women in abusive relationships, using her own experiences of domestic abuse as a catalyst to bring awareness and to help others. Jennifer has published two publications, ‘Isolation Junction’ and ‘Clipped Wings’. Jennifer has listened to her readers and has grown a digital community to support discussions around domestic abuse online. Starting with her Twitter Chat that opened late 2017, #AbuseTalk, developed into an online forum in 2018.  Jennifer said: “Together we are Louder”.

Vickie Robertson Our founder is a child and adult survivor of domestic abuse in its many forms. Vickie showed how the cycle can go round and round before you finally get out and that the bruises you can’t see can last a lifetime. She wants better knowledge and understanding of abuse for all services and how using trauma informed approaches is vital. Vickie spoke about founding Kaleidoscopic UK and filling in the gaps of services available where many are falling through. Having survivor led / peer support is essential to healing and keeping the cycle broken along with threshold free and ongoing services.

Survivors also spoke out about their first-hand experiences of the system and how services could further assist.

The speeches by all participants provided an enlightening and educational experience for all those attending. The feedback has been incredible and how hearing from a great scope of survivors and professionals has created a deeper level of understanding and many felt empowered to be able to create change.

A message from Dr Phillip Lee